Jacob Beningo is an independent consultant and lecturer who specializes in the design of embedded software for resource constrained and low energy mobile devices. He has successfully completed projects across a number of industries including automotive, defense, medical and space. He enjoys developing and teaching real-time and reusable software development techniques using the latest methods and tools. He blogs for DesignNews.com about embedded system design techniques and challenges. Jacob holds Bachelor's degrees in Electrical Engineering, Physics and Mathematics from Central Michigan University and a Master's degree in Space Systems Engineering from the University of Michigan. 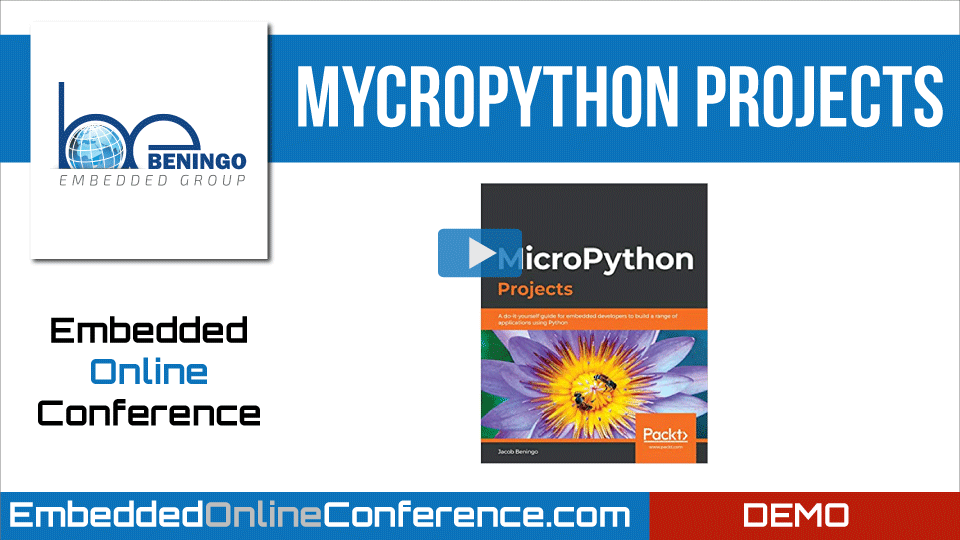 In this session, embedded systems consultant and author Jacob Beningo discusses MicroPython and how it is being used today to build products. Jacob also provides an overview of his new book MicroPython projects and demonstrates a gesture controller written completely in MicroPython.
UpvotesNewestOldest
Andrew
Score: 0 | 12 months ago | 1 reply

Hi Jacob thanks for the book. I have just added it to my Oreilly toRead list :).
I would have three questions:

It is really interesting conference. Thanks (to you and others) for the organizing it.

Thanks for the questions. Also I'm glad to hear that you are enjoying the conference.
1) There were several reasons for selecting MicroPython for the satellite. First, we had a small team and a lot to do and we were able to have the EE's write test scripts to test and validate the hardware. Second, the main software team knew Python well but not C or C++. Third, there was room for risk on the mission and we all wanted to see if we could make MicroPython work on orbit successfully. We were running it on an STM32 at about 120 MHz and while more CPU cycles are needed to run the interpreter, the satellite had enough power budget for it. (In fact, there were several application processors running Linux so power was not an issue in this case).

2) The interpreter is executed on the microcontroller. You can still compile scripts and code into the kernel or create what they call frozen modules which is byte code that can execute more efficiently than a text based script.

3) Yes. It does have GC (garbage collection). MicroPython has API's to allow a developer to control GC. It usually runs pretty fast but we all know murphy makes sure it runs at the worst time. The developer can enable and disable collection for critical activities to ensure a deterministic and real-time response.

Thanks again for the good questions!

Thank you for that info. I will have to do some personal project with STM32 and microPython in the near future.

If you have any questions about MicroPython or software development techniques, I'm happy to answer our questions.